Now available! An extremely rare book, one of the earliest novels inspired by the Jack the Ripper murders, THE DEVIL IN A DOMINO (1897) by "Chas L'Epine". One contemporary critic called it “a gruesome compound of madness and butchery, with nameless horrors in the background. No sane person could find pleasure in reading such a story … it would have been better had it not been written.” Sounds like our kind of book!

Features a new introduction by Simon Stern and a colorized reproduction of the original cover art. 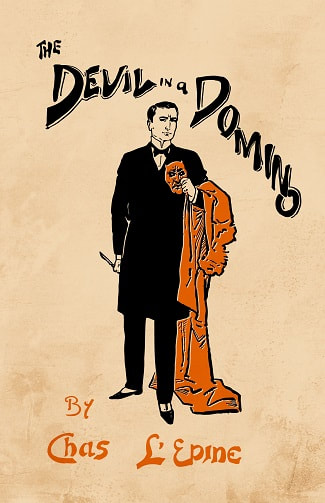 The offspring of a profligate scoundrel and a drunken circus performer, Aleck Severn was born inside a prison’s walls after his mother stabbed his father to death. Severn shows no outward signs of inheriting his parents’ faults: a handsome, affable man about town, he is popular with his friends and beloved by his wife Marianne. But she begins to suspect her husband has a dark secret. What is he doing during those long nights alone at a remote house? And what connection could it have to the bodies of murdered women being found around London?

“[A] peculiarly repulsive piece of writing, indicative of the low and morbid type of so-called literature which is purveyed to a half-educated constituency.” – Edinburgh Evening News

“In its diabolical horrors it recalls the ghastly series of crimes supposed to have been the work of ‘Jack the Ripper.’ Those who like to sup on sensation will find all they want in The Devil in a Domino.” – Dundee Evening Telegraph