New release! Don't be fooled by the schlocky title: Ken Greenhall's Hell Hound (1977) is a lost classic of literary horror whose titular canine, according to Too Much Horror Fiction, "makes Cujo seem like a clumsy amateur". Narrated from the point of view of a sociopathic bull terrier on a homicidal search for the perfect master, Greenhall's novel was adapted for the French black comedy film Baxter (1989). Features a new intro by Grady Hendrix, author of Horrorstör and My Best Friend's Exorcism. 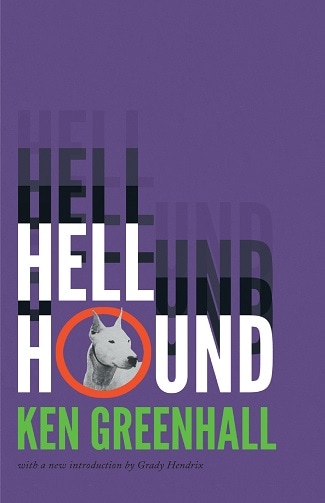 ‘What are the possibilities of my strength? That is a thought I have never had before. What if some morning as the old woman stood at the head of the staircase she were suddenly to feel a weight thrusting against the back of her legs? What if she were to lunge forward, grasping at the air, striking her thin skull against the edge of a stair? What would become of me if she were found unmoving at the bottom of the stairway?’

Such are the thoughts of Baxter, a sociopathic bull terrier on the hunt for the perfect master, as he contemplates the demise of his first victim. The basis for the acclaimed 1989 film Baxter, Ken Greenhall’s utterly chilling and long-unobtainable Hell Hound (1977) has earned a reputation as a lost classic of horror fiction. This first-ever reissue includes a new introduction by Grady Hendrix.