Winter, with its early sunsets and long, chilly nights, is the best season for reading an old-fashioned Gothic novel, so we're pleased to have a new one available: COUNT RODERIC'S CASTLE (1794), one of the most popular of the early Gothics published by the Minerva Press. This first new edition in over 150 years is available in hardcover, paperback & ebook worldwide and features a new introduction by Hannah Doherty Hudson. 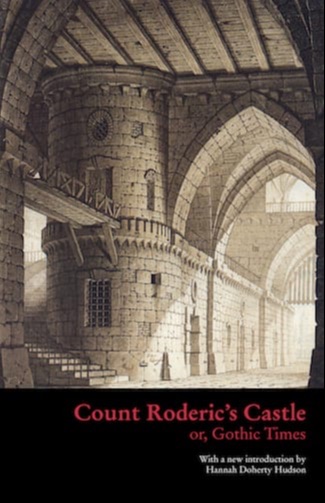 'A deadly paleness overspread the countenance--the eyes were hollow, and sunk--the hair was clotted with blood--with which his garments were also stained, and the light which Anselmo had descried, proceeded from a taper which he held in his hand.'

Set in medieval Lombardy, this is the story of the trials and tribulations of the virtuous Rhinaldo and his beloved Isabel. The barbarous usurper Astolpho has seized the throne, murdering Rhinaldo's father, Count Roderic, and imprisoning Isabel under the guard of the abominable Rhodolpho. Can Rhinaldo win back his birthright and save his true love?

With a fast-paced plot that features many of the elements for which the Gothic novel is known--brave heroes and detestable villains, ancient castles, dark dungeons, and a vengeful spectre--Count Roderic's Castle (1794) was one of the most popular of the early Gothic novels issued by the famous Minerva Press. This edition, the first in over 150 years, includes a new introduction by Hannah Doherty Hudson.